A trip to space that students step into during Exploratory Robotics is playful, imaginative, + engaging, especially with a person like NASA's Katie Stack

As the grainy particles settle, the picture comes into focus, slowly. Wide swaths of sand paint the unfamiliar terrain in soft arcs and waves. She inches the Mars Rover forward with a gentle push of the toggle; in turn, the image on the screen reflects back this forward movement. The human engineer with her hand on the toggle breathes a sigh of relief. It is only the first of many small, carefully calculated movements in an epic scientific investigation, but it is something. She takes solace in the metal being she has created and presses onward, hoping to find a seed of promise in this endless sea of sand.

Who is this human, and what’s her story?

She is a curious thinker, a creative engineer, and a member of a team of EXPLO students who, together, will work to overcome various obstacles and unexpected challenges in their explorations on Mars throughout their Exploratory Robotics course.

Their goal? Collect soil samples to find new materials or potential energy sources that can be brought back to Earth for further testing. As a team, they will build and adapt their robot to respond to the demands of its changing environment — planning, designing, engineering, problem solving, and negotiating conflict together.

Okay, so the truth is that we don’t actually have students controlling rovers on the planet Mars as they look on from their computer screens at NASA. But we come pretty close to the real thing.

Okay, so the truth is that we don’t actually have students controlling rovers on the Mars as they look on from their computer screens at NASA. But we come pretty close to the real thing. Like the student embarking on her scientific investigation, guiding her rover gently across “Mars,” building our Exploratory Robotics course is made up of many small, carefully calculated movements so that the simulations students participate in feel as authentic and truthful as possible.

For starters, we do our research so we know that what we are teaching is accurate. Attached to the robots that students build are small cameras that project an image back to a TV screen in a separate room. This is intentional — we want students to grapple with the real challenges of what it might be like to communicate with a device 140 million miles away. We also consult with experts, like EXPLO alum Katie Stack, Ph.D., to build the best story and to create a course that truly comes alive — that feels real, meaningful, and engaging for our students.

. . . We want students to grapple with the real challenges of what it might be like to communicate with a device around 140 million miles away.

As a research scientist at NASA’s Jet Propulsion Lab, Stack works with engineers to design and operate the spacecraft that explore our Solar System.

“My focus is on NASA’s Mars Rover missions,” Stack says. “I’m a participating scientist on the Mars Science Laboratory Curiosity rover currently exploring the surface of Mars, and have recently become the Deputy Project Scientist of the Mars 2020 mission — the next Mars Rover mission and the first step in a potential multi-mission effort to bring samples from Mars back to Earth. It’s thrilling to think that I’m one of the very first people to explore this new part of the Solar System.” 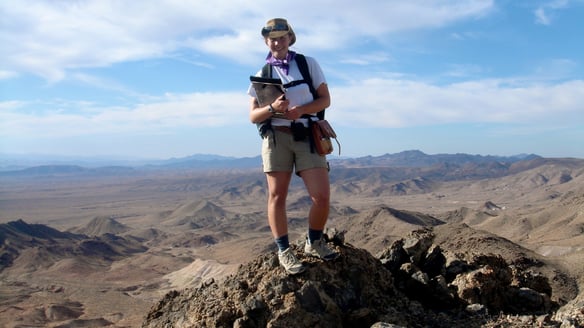 The story of a trip to space that students step into during Exploratory Robotics is playful, imaginative, and engaging, and then a conversation with a person like Katie Stack turns the fantasy world into a professional aspiration that feels true and attainable.

The story of a trip to space that students step into during Exploratory Robotics is playful, imaginative, and engaging. A follow-up conversation with a person like Katie Stack turns the fantasy world into a professional aspiration that feels true and attainable.

“EXPLO is this sweet spot where students are still willing to engage in the fantastical worlds that we create, but they are also eager to imagine themselves in the shoes of a professional — somebody that they could imagine themselves being in 20 years,” says Laura Farmer, director of teaching and learning. "So the experience of being able to video chat with an EXPLO Alum who currently works at NASA? Pretty incredible."

Using Vex Robotics and Vex EasyC programming language, students are able to build unique, customizable, and complex rovers that are designed with purpose to meet and respond to challenges that arise throughout the course. This combination of space simulation infused with robotic engineering provides a unique learning opportunity for our students.

They start to actually think of themselves as engineers, and simultaneously, are building concrete communication, organizational, goal-setting, and team-building skills. Using a deliberate scrum-style workshop, students learn how to develop a plan for their robot and break down their goals into those that are immediate, later, and distant. They learn how to discuss, debrief, and work together to come to a solution — skills that are transferable to any number of future educational and professional experiences.

". . .So, EXPLO at Wellesley students are both teenage students at a summer program and also robotics engineers. And it’s the “and also” that is where the magic happens."

As Stack says: “Space missions can take decades to develop, build, and launch, so the missions we’re designing at JPL today will be run by the next generation of Mars scientists and engineers. Engaging young people in STEM now, and giving them opportunities to participate in programs like EXPLO’s Exploratory Robotics course is really the first step in mission training!”

So, EXPLO at Wellesley students are both teenage students at a summer program and also robotics engineers.

It’s the “and also” that is where the magic happens — because if we can meet students where they are developmentally and also help them believe that they  already are and will grow up to be engineers, designers, and creative visionaries, then that is something pretty special.