There are a lot of stories that you only ever talk to other vets about. Some things are triggering. Other things are just like, certain situations that if you tried to explain it to somebody who hadn’t also experienced them, they really just wouldn’t understand.

Eric Edwards is well known at the Headquarters for leaving any EXPLO potluck event with an empty dish — his cooking skills are just that good. People talk about his Turkey Tikka Masala well after Thanksploration, wonder how he makes his homemade soy sauce (which complemented an impromptu dumpling party in the warehouse last year), and eagerly await his pulled pork every year at our Holiday Party. Cooking aside, Eric is the System Administrator at EXPLO, helping us with just about any piece of technology you can imagine. We chose Eric as our Headquarter Highlight this week not only because he is an IT wizard, but also to celebrate his service in the U.S. Army infantry. We wanted to take a moment to thank him for his service this upcoming Veterans Day.

Q: So, first, I was curious if you could you talk a little bit about the IT Department at EXPLO? The three of you all come from pretty different backgrounds, right?

For EXPLO’s IT Department, all three of us are pretty different types of people. Sam, who is our Software Developer, majored in Biology, Donald, our Director of IT, majored in Computer Science, and I have a degree in Journalism. It seems kind of strange but probably what bonds us more than anything is that we aren’t afraid to break things — which is really what matters most for a good IT person. We aren’t afraid to go in there and be okay if something doesn’t work. You kind of have to be the type of person that is completely okay when something fails because at the end of the day, failure really is just another form of feedback, right? The entire job comes down to using that information about why things aren’t working to figure out how to get something to eventually work. And I mean, it almost always eventually works.

Q: I love thinking about failure in that kind of way. Have you always had a job that allowed you to take risks?

I’ve always been pretty comfortable at taking risks, and willing to fail — ever since college really. And I mean, it really was being in the army that I learned how to do that.

Q: What about serving in the army helped you better understand the process of failing?

A lot of our basic training was trying to push our limits — see what happens when we push ourselves just far enough over the edge. We were tested on things like reactions to nuclear, biological, and chemical weapon training. We were tested how long we could go without sleep, how long can we could survive wearing a gas mask in extreme heat, how we could still function after marching all day...

... at the end of the day, failure really is just another form of feedback, right?

The army was all about helping you discover what you're truly capable of. It was like a constant statement telling you: ”Ok. These are your limits. This is the point of failure. Know it. Be realistic of what’s possible and what’s impossible.” And what becomes possible to you almost always ends up being more than you think. 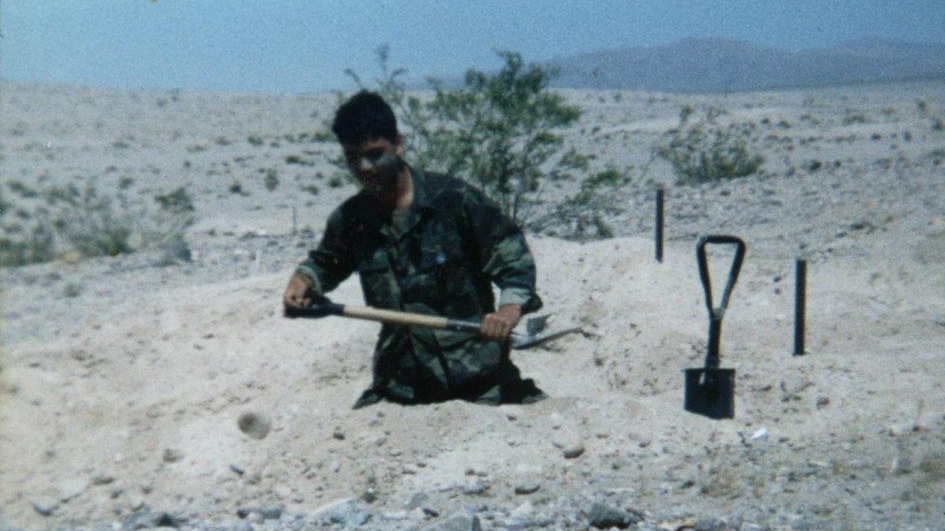 Eric Edwards while serving in infantry

Q: What made you want to join the army in the first place?

I joined the army because it was a way for me to afford to go to college. I’m from rural New Hampshire and my family wasn’t wealthy or anything. Leading up to the decision, I had lived a pretty sheltered life. Like, the day I went to go to have my physical and my IQ test for enlisting, I found out I was colorblind — and I seriously had no idea, it was a complete shock to me. I always just thought everyone else just perceived the way I saw things. Anyway, because of that, the army didn’t allow me to any technical jobs. The navy and air force wouldn’t even take me. So I could either do Army Intelligence or Infantry. The problem was Intelligence didn’t pay for college. So, that was the ‘carrot on the end of the stick'... I enlisted in the infantry, and was in the army for 3 years and 14 weeks.

Q: What's it like to have this experience that so nuanced and hard to understand?

There are a lot of stories that you only ever talk to other vets about. Some things are triggering. Some things are moments you don’t want to relive. Other things are just like, certain situations that if you tried to explain it to somebody who hadn’t also experienced them, they really just wouldn’t understand.

Q: Are there any stories about your service that you like to talk about?

When somebody does ask for a war story, there are still a few really good memories do come to mind — a lot of fun and bonding experiences happened with my platoon during down time that I still look back on. I mean your platoon is full of guys that you’ve been through nearly everything with. There are these moments of camaraderie I’ll never forget.

Eric is with his platoon, in the first row, first person from the right.

One time, we were in Panama. We were there for about 4 months at this point. A lot of soldiers were missing their families and feeling kind of down. I mean, we were confined to our a camp, we weren’t really allowed to go anywhere, especially at night. It was like 40 men trapped in a room day in and day out. One thing to note, my platoon leader and platoon sergeant really knew I was into movies.

So one day, they stopped me and said “Private Edwards, Come on in here,” and pulled me into their office. “Private Edwards, we went ahead and got ourselves and a tv and a VCR.” Which you know was a really big deal back then. The platoon leader then told me that it was my job to go to the movie store and pick out two movies for the platoon to see.

So I’m all nervous and I head to the movie rental store. At this store, there were no covers on the cassettes. You only had the titles to base what you thought the movies might be about. So the first title I saw was Lethal Weapon and I thought, 'Okay. Perfect. A classic.' The second movie I picked out was called Beaches, and I thought, 'Okay. Perfect. Maybe it’s like a light-hearted Baywatch. I don’t want to let the guys down. They’ll probably like it.'

Q: Oh no. Things don't go well from here, do they?

So I bring the two movies back. We had soda, popcorn, the works. Everyone was pumped. First, I pop in Lethal Weapon. Great movie. We all love it. The guys are all patting me on the back. I feel great. My platoon leader then asks me to pop the second movie in. So I pop in Beaches, which stars Bette Midler and Barbara Hershey and their thirty-year friendship. And, spoiler alert, the movie is a drama where one of the main characters dies of cancer. I mean, later I find out that Beaches is like one of the top five saddest movies of all time.

Well. Obviously I didn’t know that. In the first five minutes, everyone is giving me total crap. About halfway through the film, the guys are actually into it, eyes glued to the screen. By the end of the film, everyone was sobbing. Huge blubbering tears are rolling down our faces. You have forty military guys, and every single man was bawling their eyes out. I loved that night. But Beaches, man. Who knew?

By the end of the film, everyone was sobbing. Huge blubbering tears are rolling down our faces. You have forty military guys, and every single man was bawling their eyes out.

Q: Sounds like some forgiving guys! How important was your relationship to your platoon during your service?

Going twenty-one days without showering is miserable, eating the same food every day is miserable. Not having access to media, always getting sick...There were bad times. But the friendships I made, and the bonds I developed, I can look back on elements of it and feel really lucky.

When you are in the army — and the same thing like a sorority or even here at EXPLO —  because your experiences, your drive, your commitment are all shared, you develop this really intense and important bond. There’s a tightness there that you have that you might not have with your college friends, or coworkers at another organization.

Going twenty-one days without showering is miserable, Eating the same food every day is miserable. Not having access to media, always getting sick...There were bad times. But the friendships I made, and the bonds I developed, I can look back on elements of it and feel really lucky.

Q: You've invited us to celebrate Veterans Day by gathering together at lunch to share a meal together. What exactly do you have in mind?

I'm bringing in Meal-Ready-To-Eats — food that infantry ate when they were out in the field — because I felt like it was a cool way to show my co-workers what soldiers really do sacrifice when they serve, even in unexpected ways like food. I mean, Napoleon said, an army marches on its stomach. If you don’t have food, you don’t have an army. So I thought this would be a good representation of the everyday life.

I was  also pumped to bring MREs to the Headquarters because it really feels like such an EXPLO thing — I mean, we’re all about learning through exploration. What better way to learn than through combining the culinary with the science. Breaking fast together is also just a cool way to bring people together. 24 different flavors of MREs should do the trick.

Q: Do you anything for yourself on Veterans Day?

No I don’t. I reach out to my buddies, tell them I’m thinking about them. But I’ve never really thought about doing something for myself before. It just never really crossed my mind.

The Experts Come to EXPLO