EXPLO Mini at Wheaton student Nikhil shares why having a back-up plan is so important when doing creative work — like building your own computer.

A (very) recent-aspiring vlogger, Nikhil figured the best way to house his productions was to start with the basics — build a computer from scratch. In week three at EXPLO Mini, he has learned all about what having a 'back-up plan' really means, and why it's so important when it comes to creative work.

You might be surprised to hear this but after my first week of classes, I decided to build a computer from scratch. I wanted to try something new, and I’ve never tried to build an electronic device before. After my computer programming class, I immediately thought, “Huh,why don’t I give it a try?” so I am.

I’m really interested in becoming a professional Vlogger and I thought knowing how a computer works will maybe help me become more knowledgable in the tech field.  And plus, I really just wanted to give it a chance. I'm all about trying every thing I possibly can — saying yes to any opportunity.

And plus, I really just wanted to give [building a computer] a chance. I'm all about trying every thing I possibly can — saying yes to any opportunity.

Since EXPLO Mini started [two weeks ago], I have two projects going. One is building this computer and the other is filming the vlogs for my youtube channel — sort of simultaneously. I recently had a sleepover with a friend from EXPLO, Jake, where we created a vlog about different ways you can explode a watermelon. We tested dropping it at different heights and popping it with different material and stuff.  It was pretty cool. That video isn’t yet up on YouTube but our channel has eight subscribers already so I think the content we do have is pretty good. 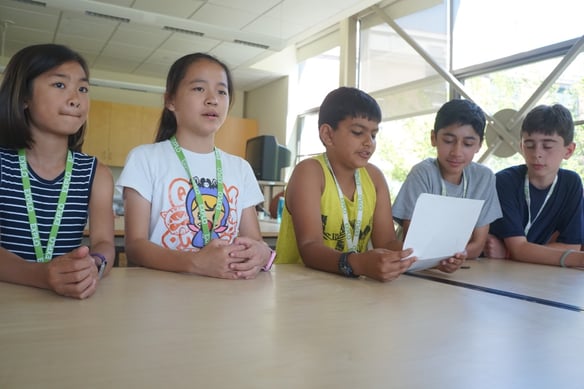 Nikhil persuading a panel in a "Shark Tank" style final pitch in Business and Entrepreneurship.

Even though my first class was Introduction to Programming, the class that has helped the most — and has been the most inspiring — was last week’s Business and Entrepreneurship because it showed me that if an idea doesn’t work, you should always have a back-up plan. If you want to try and do something, you have to map out and troubleshoot in advance so that it's easier to not let anything get in your way.

Building a computer is one word: SCARY. Literally anything could go wrong at any given time! Your CPU could get fried…  if you make the slightest mistake, you have to problem shoot the entire system. But I just recently learned that if a mistake happens, you have a bunch of different resources to help you fix it.

Building a computer requires a back-up plan, but so does finding the right career. The main reason I go to EXPLO is to figure out how many “back-up” plans I can find. I don’t really love school, but here, I get to explore a bunch of different subjects, try a bunch of different sports, and figure out what other things I might like to pursue if vlogging doesn’t work.

For now, my plan is make a Youtube channel when I’m eleven years old. When I graduate, become a professional movie producer, and maybe some day go on and become an architect.

Out of This World: The Mars Center for Science and Technology at Wheaton College