A Life of Daring and Courage Starts at EXPLO

EXPLO is where students come to connect with others, take risks, and dare greatly.

“At home, I really am the epitome of a shy kid. But here, I have a completely outgoing alter-ego,” says Henry, a high school senior from Maryland. “One of my true passions is dancing. At my school, we have a weekly community meeting that has a talent portion to it. Plenty of people sign up, but I’ve never been able to bring myself to do it. I’m way too scared. But here at EXPLO, I sign up for the talent show every single year, without fail.”

He probably wouldn’t say it of himself, but Henry is a shining example of what it means to live life with courage and daring. Think about it: how many of us at 16- or 17-years-old would have risked failure — or worse yet, embarrassment — to reveal the truest version of ourselves to the world?

And yet Henry returns to EXPLO summer after summer to do just that. Because the environment we create — our community of active kindness — invites students from every walk of life to step out of their comfort zone, to shrug off the traditional expectations of achievement, to transform themselves, and lean into the moments of uncertainty rather than run from them.

“I’m always nervous because I know that I’m not the best dancer,” Henry adds. “But here, there’s never the thought about what would happen if I don’t do well. Last year, the entire audience gave me a standing ovation. It felt absolutely amazing. If life could be like the EXPLO community, it would be an incredible place.” 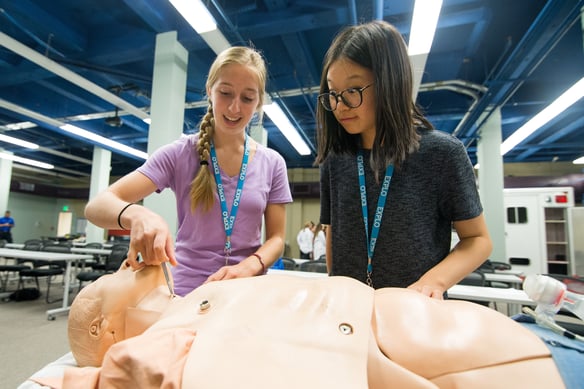 An Environment Built for Exploration

Henry is just one example of the hundreds of students who come to EXPLO each summer to practice living with daring and courage. There’s Ex, a talented musician who comes to EXPLO to practice connecting with others beyond the notes. There’s Karlie, a small-town pre-teen who calls EXPLO a clean slate where you can be anything you want to be, and where you can actually feel yourself changing and exceeding your expectations of yourself.

So what is it about EXPLO that allows these students to take risks, to connect, to grow — to thrive — in ways that they aren’t able to at school and in their home communities?

Students who come to EXPLO aren’t invited based on their grades — because they have been designated as gifted or high-achieving. They come because they have chosen to heed the call of curiosity. Because they want to engage with the world in more meaningful ways than tests and awards — and they know that EXPLO is where they can do that.

Because when students are freed from the burden of grades — when they are no longer being judged based on predetermined standards of success and are instead supported in the process of discovery — they can seize the opportunity to explore the world around them with unbridled curiosity.

In other environments, particularly those built for achievement, curiosity can feel uncomfortable. It can bring up emotions, ideas, and points of view that, in many other environments, are better left unexamined. But in an environment built for exploration, the willingness to sit in the uncomfortable moments, to question our experiences, even to fail (sometimes spectacularly) cracks open paths to self-analysis, interdependence, and greater appreciation for differing perspectives.

And when students feel truly known in their community — when they experience being part of a group of individuals who value their differences and cheer every attempt at authenticity — that’s when they become willing to put themselves out there and find the courage to be that person not only at EXPLO, but at home, at school, and in every new community they encounter along their path. 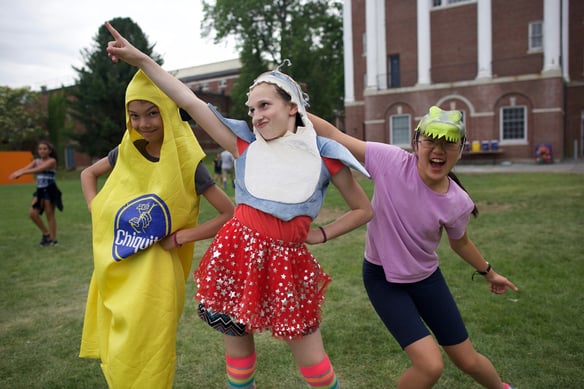 At the outset of her bestselling book, Daring Greatly, researcher and storyteller Brené Brown invokes Theodore Roosevelt’s “Citizens in a Republic” speech at the Sorbonne in 1910 to illustrate what it means to live a life of engagement — what it means to be all in.

The credit belongs to the man who is actually in the arena... who strives valiantly; who errs, who comes short again and again,

because there is no effort without error and shortcoming; but who does actually strive to do the deeds; who knows great enthusiasms, the great devotions; who spends himself in a worthy cause;

who at the best knows in the end the triumph of high achievement, and who at the worst, if he fails, at least fails while daring greatly…

To dare greatly, Brown says, is “to show up and allow ourselves to be seen.” That means eschewing our instinct for perfection in favor of engaging with the world and with each other.

“Compassion and connection — the very things that give purpose and meaning to our lives — can only be learned if they are experienced,” Brown writes

At EXPLO, we have spent decades fine-tuning our community to be a place where students can show up and stand up; where students like Henry can let go of the fear and insecurity that follows them like a shadow everywhere else and experience true connection to others; where they can express themselves wholeheartedly.

It’s not bravery or valor. It’s the root of the word — the Latin cor, which means heart. To have courage, Brown says, is “to tell the story of yourself with your whole heart.”

It may not be easy, but those things worth exploring rarely are. To live a life of courage is daring — and EXPLO is a great place to practice. That's what makes EXPLO one of the best summer camps.

If you have any questions about EXPLO, or how it teaches students to exercise daring and courage in their daily lives, you should feel welcome to schedule a call with one of our Admission Officers or call us directly at 781.762.7400.

The Case for Encouraging Independence in Young Kids